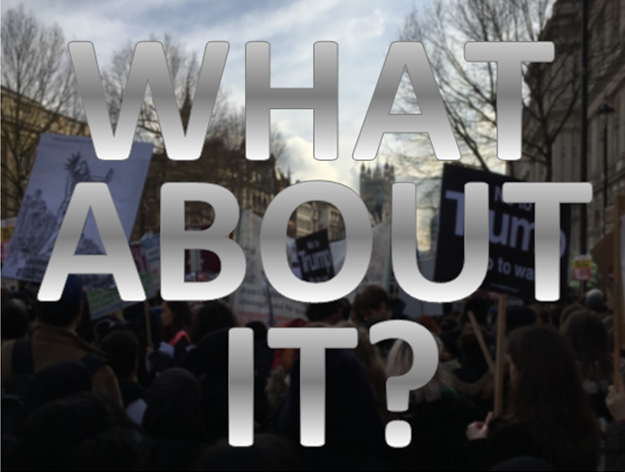 If your response to justified outrage is to cry “BUT WHAT ABOUT ALL OTHER OUTRAGE” perhaps you’re part of the problem.

Let’s be clear here. There’s a lot of shit in this world and sometimes stuff falls through the cracks. Western privilege is a real thing, western complacency is another. We fell into a false sense of security that we were on the right track and we could take a step back.

Look where that got us.

It doesn’t matter what side you’re on you can’t deny that the UK and US (and arguably half of Europe…) are more divided now than they have been for decades. It’s been bubbling under the surface for a while but it all started to fall apart in the weeks before Britain voted to leave the EU and the cracks have been widening ever since. It’s been tough on all sides of the political spectrum – tiring on both sides of the Atlantic, and it’s only becoming more pronounced.

One thing it has done is force people to mobilise, to pick a side. Never before have I seen the sort of will to get out on the streets and protest than I have in the past month and a half. It seems the inauguration of the racist, sexist oligarch Donald Trump was the final straw and all over the world, people have decided enough is enough.

The scenes are astonishing. Tens of thousands of men and women flooding the streets with picket signs; laughing, chanting, crying and raging.

But there’s always a group on the sidelines, rolling their eyes and pretending they’re too cool for it all. “But I’m not a victim” murmurs Sally as she sips her organic peppermint tea. Gordon rolls his eyes in his Mondeo and turns the radio down. “They’re just sore losers, it’s just politics. I’m bored”. To them, a vote on either end of the political spectrum is enough. To them, that’s how democracy works.

It’s not strictly party political, certainly it isn’t defined by class. They’re usually white but they’re not all racist. Most of them are probably rather nice.

If you agree with them, you even might be one of them.

I’ve known a lot of people when faced with an injustice to shrug it off and go “oh well, it could be worse”. It’s a common thought and one that makes sense. It’s reassuring. God knows I’ve done it myself!

“It’s so much worse in other places”
“There are more important issues to protest”
“If you really care so much about ‘issues’ why don’t you focus on this rather than that?”

I can’t tell you how many conversations I’ve had, especially over the past few weeks, which focused not on the issue at hand, but on trying to get back to that issue, because someone else was intent on derailing the discussion by simultaneously belittling the merit of an action and steering the conversation to a different topic as a way to maintain some form of watered-down moral superiority.

The most recent example came a few days ago on a Twitter thread started by the official Women’s March. A woman – we’ll call her ‘Deb’ – commented on an announcement with: “If you care about women’s rights, why don’t you protest Sharia law?”

For a start, do you know the ins and outs of Sharia Law?

At its heart, Deb’s comment is the same as any of the thousands currently in circulation belittling any form of affirmative action taken by a forward-thinking faction (be it the women’s march, LGBT rights, the #BlackLivesMatter movement, anti-fascism protests or any other) in order to show solidarity with marginalised groups.

At best, this kind of whataboutism is a way for someone to steer the conversation from the matter at hand to a parallel topic the other person in the room (or the twitter feed) would rather talk about. Why? Because it makes them feel better about themselves to deny the existence of any oppression in their own social circles that they might actually be able to do something about.

This last bit is important because it’s a way for fundamentally decent people to distance themselves from an issue by either denying its existence or – by comparing it to other, possibly more extreme issues – belittle its importance to the extent it seems trivial, and therefore not worthy of any time or effort to address.

“Why won’t you march for Saudi Arabia?” one man asks of the women’s march, ignoring the fact it actually covered all 7 continents and INCLUDED THE CAPITAL OF SAUDI ARABIA Riyadh! – and of course never offering to do anything himself.
The answer of course is. “We” have!

The truly annoying thing is, it also serves to silence legitimate debate on any subtleties an argument might actually have.

There genuinely is a case for discussing the irony that we all suddenly care about a women’s march now it’s millions of white women affected rather than just non-white women (who we aren’t) – or Muslim women (who we feel culturally superior to).

But by bringing it up right now? Be honest with yourself, is it because you genuinely do spend half your time wishing you could do more to help women in the Middle East? Or is it mainly because you don’t want to pick up a sign and spend your Saturday freezing your butt off on the streets?

The cynic in me thinks the latter. And I am nothing if not a cynic when it comes to matters of populist interest.

One main reason for my cynicism is that these whataboutisms are very rarely ever followed by any actual suggestion of how to help end the oppression of the group they purport to care about! In my experience, real activists focusing on the fight to protect one particular group very rarely use their platform to belittle the plight of any other.

And why is this? Because there is no emotional cap on empathy!

Focussing on one particular fight for justice does not mean you no longer care about any other! We seem to live in a society where we believe there is a finite amount of compassion, and like some strange warped version of the Sims, by upping “compassion” points for one group we have to lower our compassion for another.

Well that’s not how life works, and by pretending it is, you’re not only reducing your humanity to a series of point scoring soubdbites, you’re also undermining attempts to take any actual positive steps at all!

You’re also absolving yourself of any personal responsibility to do anything, by passing it on to other activist groups.

I’ve started dealing with this issue in the simplest way I can. By not only calling them out, but taking them at face value and asking – genuinely asking – for ideas on how to help.

“Have you got any ideas then? You seem really passionate about the issue of women’s rights in the Middle East. What organisation are you working with? What demonstrations are you helping to organise? I’ll be happy to march by your side!”

The response is universal. Silence.

I am not here to judge any personal decisions on whether or not you want to join in on marches or front a new political movement. We can’t all fight every battle. Unlimited personal responsibility would drive the best of us mad. We have to find our own individual lines to draw in the sand to protect ourselves and allow a life outside of politics. What bothers me is the feigned interest in serious issues for the sole purpose of belittling the efforts of other people who actually do want to do some good!

Apathy dressed as moral superiority is not a legitimate stance. We all play a part in democracy and for some, putting a cross on a ballot is enough, but if you’re not going to join a movement or pick up a sign and march for the various causes around the world, the very least you can do is be honest with yourself about why.

And you can stop judging other people on their desire to do some good if you can’t be bothered to do it too.

Or, you know…you could organise that march for women in Saudi Arabia. Because if you do, I’ll be right there beside you!

Do you have an opinion on an article? Comment and share.
Do you have something to say? Email us at ourteamq@gmail.com – pitch us an article or inspire our next piece!
Or Tweet us @ourteamq