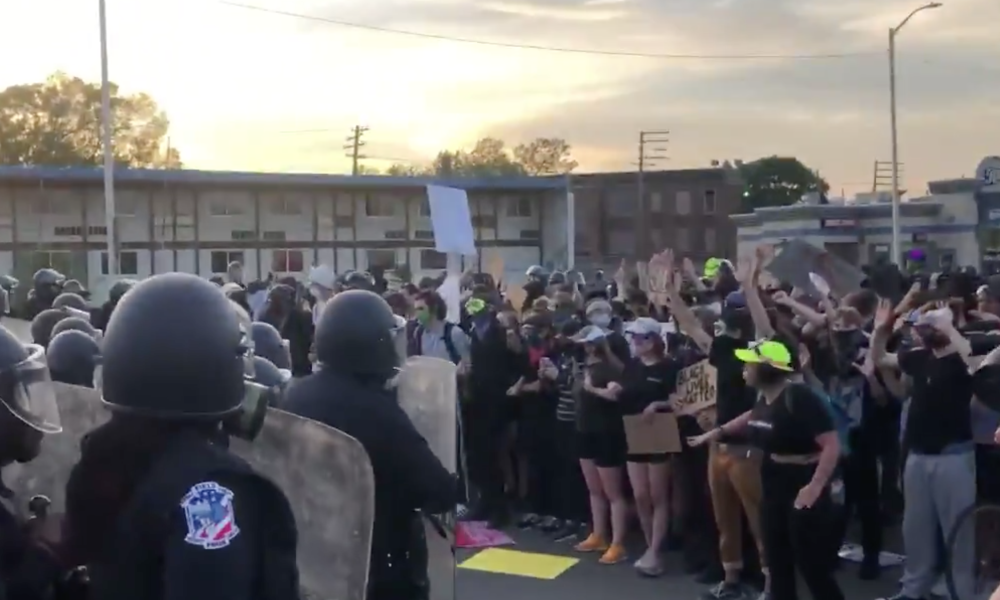 We put together examples of Police behaving badly during the George Floyd protests so the media doesn’t have to.

The world is talking about the murder of George Floyd and rightfully so. The latest victim of centuries of brutality and oppression, the video of an American Policeman literally kneeling on the neck of the unarmed man has been seen by hundreds of thousands of people worldwide.

We’re not going to share that video here. Partly because you’ve probably already seen it, partly because you don’t need to see it to know it’s not ok and partly because we don’t want to buy into the same narrative going around – one that centres on the idea that a few bad cops make a few bad decisions in an otherwise decent police force.

Over the past few days, videos have circulated of officers kneeling in solidarity with protesters, an uplifting sight in a moment that feels so full of division, so wrapped up in the “us and them”. You might have shared some of those videos or liked some of the tweets, but again, we’re not going to share those. Because what happened after that five minutes of togetherness?

THE HEAD OF DPD KNELT WITH US THEN 10 MINUTES LATER AUTHORIZED TEAR GAS. FUCK THEIR PERFORMANCES

First-off, it’s not entirely fair on the media to imply that they haven’t been showing Police brutality and/or the blatant disregard for human rights on air. It just so happens that on multiple occasions, live coverage caught instances of Police malpractice by simply being at the protests.

The test to get into the police force must be multiple choice… pic.twitter.com/ENAGyaPfkb

In other cases, the media themselves became victims of bad Police work.

A CNN crew was arrested while giving a live television report in Minneapolis, where the crew was covering ongoing protests over the death of George Floyd. They had clearly identified themselves as press. https://t.co/QklqlJm7mD pic.twitter.com/0xreuTPuWS

Watch the shocking moment #7NEWS reporter @AmeliaBrace and our cameraman were knocked over by a police officer LIVE on air after chaos erupted in Washington DC. pic.twitter.com/R8KJLnfxPN

In case you didn’t know, the video above was taken by the White House, while Donald Trump was about to address the nation. The Police used force to remove the peaceful protesters so Donald Trump could walk to a nearby church for a photo opportunity.

SHOCKING: to see members of the media also taking direct, *intentional* punches and swings from police as they cleared the streets of protesters outside the White House. #protest #Washington #WashingtonDCProtest #PictureOfTheDay pic.twitter.com/7zR154O6Jg

Police in Washington DC tackled the BBC cameraman – I don’t want to hear a single person say police brutality is not real, the cameraman was obviously not acting violently or even in partaking in the protest and yet was still attacked. This is undeniable abuse of power. #blm pic.twitter.com/PYfkYVOFeM

Just got attacked, punched, kneed and elbowed by police, who threw my phone and broke my glasses. More worried about the protesters. Mass arrests. Out of control in Detroit. That was police brutality. pic.twitter.com/o4dSZ8uMVN

the police literally slam the reporter to ground and another pepper spray him #BLUEFALL pic.twitter.com/ZJSa0oE5b0

But that’s when the world’s lens is on the protests. What happens when the journalists go home (or in many cases – to prison themselves)?

This video needs to go viral
most unjust arrest i have seen so far. #Riot2020 pic.twitter.com/6fpbZyOEd9

The New York police, protecting the peace and defending the public, by driving a car into a crowd of protesters pic.twitter.com/Zd6iklOhma

For all the people saying, "Why don't they protest peacefully?"#FTP #PoliceBrutality #protests2020 #Peacefulprotest #BlackLivesMatter pic.twitter.com/3L5MZQF5N1

TURN THE VOLUME UP: This footage is unbelievable!

This happened today: Philadelphia Police Officers were firing tear gas on peaceful protesters who were TRAPPED on a fenced off hill on the side of a highway!

Secluded behind a wall and looking around to see if anyone was watching so they could beat him. #PoliceBrutality #BlackLivesMatter #PoliceViolence #DefundThePolice pic.twitter.com/12dWIZnbRT

This police officer is actually SPITTING on someone!!! WTF is wrong with these people??!! #PoliceBrutality #BlackLivesMatter pic.twitter.com/jBLxfQDR1s

Orlando Police aggressively arrest protestors and use pepper spray. I got some pepper in my eyes too. #PoliceBrutality #TrumpDictatorship #orlandoprotests #protests2020 #protest pic.twitter.com/0oThPlSMlo

They kick em while she’s down … even after she was maced. #PoliceBrutality #PoliceViolence pic.twitter.com/QtqPGpPGQF

I mean. They couldn’t stop themselves from blatantly escalating things. Even for a few days, even cynically, even for the optics. pic.twitter.com/YVDjnvVGnY

This is one of the most absolutely insane moments I've ever seen on live television. pic.twitter.com/Uvzig8YGSa

actual footage of me getting shot at with wooden bullets, while providing medical care. #ACAB pic.twitter.com/zgtiOy5GTz

I am heartbroken and disgusted to see one of my family members a young black man w/his hands up peacefully protesting and an NYPD officer pulls down his mask and pepper sprays him. @NYCSpeakerCoJo @BPEricAdams @FarahNLouis @JumaaneWilliams @NewYorkStateAG @NYPDShea cc: @EOsyd pic.twitter.com/tGK5XWS0bt

my older brother went to a protest in Denver last night. as the police were leaving, one of them shot him with a pepper pellet that smashed the back of his phone and exploded in his face. they were ~30 feet from each other and it looks like the officer aimed directly at his face pic.twitter.com/m9vxaSQbwI

We’ve chosen not to include the full footage of this next one of a 75 year-old pushed so hard he is now in hospital in a serious condition. The original video goes on to show a stream of blood immediately start leaking from the man’s right ear.

#UPDATE:
WBFO has provided us video of the incident at tonight's protest in Niagara Square. A source says that the man suffered "lacerations and a possible concussion" and police say that internal affairs immediately launched an investigation. pic.twitter.com/0pZg8BsWTo

Not even state Senators are truly safe. That’s a form of equality we guess..?

It doesn’t seem like you even need to be a protester to be subject to police brutality.

She says she was walking home with her groceries when police fired some sort of pellet in her face. Says she’s not a protester. #DallasProtests pic.twitter.com/2IyO1S9j6n

And what if you just dared to stand in the porch of your own home?

Reading Fahrenheit 451 as a kid: "Why would firefighters be STARTING fires?"

There has already been a concerted attempt to shift the narrative from peaceful protest to selfish looting; from police brutality to “necessary force”. This is not an accident.

To everyone whose immediate response to these events is to ask questions of the protesters rather than ask why in 2020 police are still able to brutalise and even murder people of colour with little to no justice ever being served, stop.

To readers in the UK and abroad who think America is alone in its treatment of non-white people at the hands of the Police force. Stop and read a book. This one is brilliant.

Those in power are trying to deflect the blame from them to those they oppress. It’s the oldest trick in the book and until now it’s worked perfectly. They’re going to keep going and they’re going to do everything they can to maintain the status quo.

Don’t let them get away with it.

UPDATE: We are updating this list with videos as we see them. This is by no means an exhaustive list.